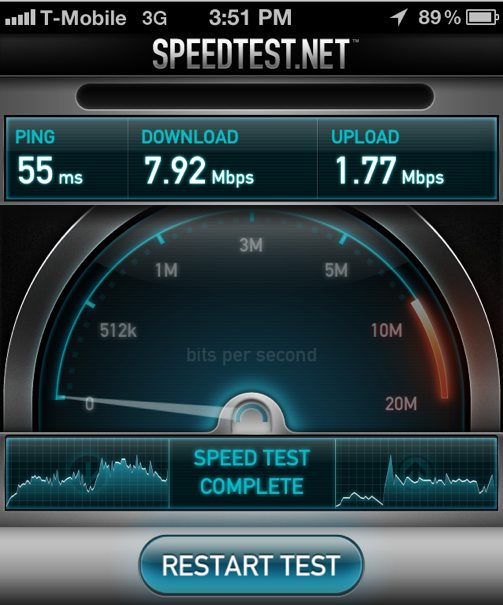 T-Mobile customers hoping for a chance to carry the iPhone have had a rough last couple of months. First of all, rumors that the carrier would be offering Apple’s handset this year have been effectively debunked. And then there was that whole AT&T takeover debacle.

So it looks like T-Mobile subscribers will have to stick to carrying unlocked iPhones. This has been possible for years, but due to the lack of 3G data, it’s kind of unpopular. However, a recent report says that 3G data is actually possible on an unlocked T-Mobile iPhone…

TmoNews, The Unofficial T-Mobile blog, is reporting that some unlocked iPhone users have been able to connect to T-Mobile’s 3G network. The site points to a chat forum where users have uploaded photos, like the one you see above, as proof of their claims.

Apparently, there are certain areas around the US where T-Mobile “re-farms” spectrum from other carriers on the 1900MHz PCS band. It does this for its HSPA+ “4G” network. And since the 1900MHz band is supported by the GSM iPhone, this makes 3G possible.

This is only available in certain areas because for the most part, T-Mobile uses 1700/2100 AWS bands for its network — which the iPhone doesn’t support. The re-farmed 1900MHz spectrum is said to be available in Nevada, Utah, California, and other northwest states.

But 3G data is by no means a “sure thing” in these areas:

“I can’t emphasize enough how unlikely it is you will find this signal at the moment but, without knowing T-Mobile’s plans for their 1900MHz PCS band, it’s possible we could see more of this pop up in the future but again, it’s likely to be are.”

Regardless, it’s interesting to see that some unlocked iPhone users are getting 3G speeds on T-Mobile — something that has long since been thought to be impossible. We’re curious to see what this all means for the carrier, and the iPhone, in the future.