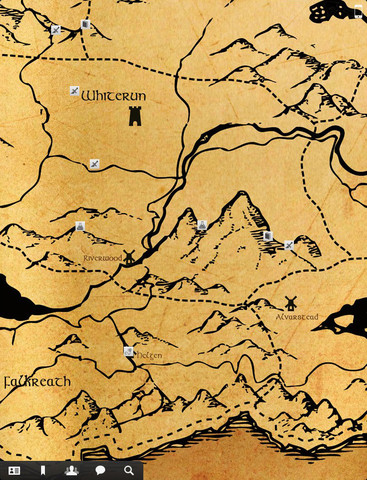 If you’re a gaming fan then you’re probably well aware of the latest open-world RPG that is taking the world by storm, Skyrim.

The thing with games as large as Skyrim is that, unless you’re a world champion in the memory department, it is extraordinarily easy to get lost in the game’s expansive universe. Yes, there is an in-game map that can be brought up for viewing when needed, but constantly opening and closing the menus gets tiresome pretty quickly.

That’s where Dragon Shout, a new iOS app, comes in. What you’ll get for free, is a hand-drawn map of Skyrim, complete with the ability to place markers when you find something you want to visit later…

Dragon Shout is only available for iOS right now, but an Android version is in the works. We mention the Android version for one reason: Dragon Shout will soon feature a chatroom and online community where likeminded folks can get together. That will obviously be more useful when more people are using it, hence the reason a cross-platform release could prove useful for everyone involved.

For a free app, we found Dragon Shout to be rather useful, if only because we liked having a map that you can refer to that is not on-screen. Considering that the app is free, you can’t really go wrong by at least giving Dragon Shout a go in the App Store.