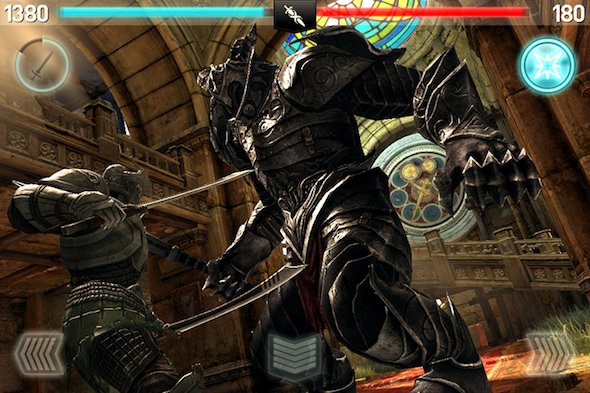 Infinity Blade was one of the first real games to hit iOS. Yes, Angry Birds and Flight Control had come before, but those type of games could never be called an epic adventure full of swords and things to swing said swords at.

When the Infinity Blade creators, Epic, originally showed the game off on an iPhone 4, it looked gorgeous. The sequel goes one or two steps further, and if you’re playing the game on an iPhone 4S or iPad 2 then you’re in for a real treat.

Some lucky folks have been playing Infinity Blade 2 for a while now, and they’ve gone and shared their opinions with us, the people of the internet. Here’s a quick roundup of what people are saying…

It is perhaps a testament to how far smartphone gaming has come that IGN, a longstanding, well-respected gaming website, has taken to reviewing Infinity Blade 2.

Apparently, the combat system has been improved much more, and the game overall feels like a cut above its older brother.

“I didn’t love the original Infinity Blade as much as most gamers, but Chair addressed each and every concern with the sequel, and made the game more than four times bigger to boot. I’m now a complete believer. I can’t wait for what else the studio has in store.”

Eurogamer is another web site usually focused on the more traditional video game platforms, but just like IGN, it has not been taking a real interest in mobile gaming and the iOS platform.

Eurogamer does have some criticism for Infinity Blade 2’s less linear approach to that of the first game, suggesting that it can become a distraction. Infinity Blade was almost an on-rails RPG, where the sequel appears to offer more free reign, something many will love but some will seemingly hate.

“Infinity Blade 2’s less linear map does mean the game slightly loses its focus. Instead of going back to the same boss over and over again until you defeat it, it’s easy to get distracted down a different corridor and end up in the mitts of a completely different high-level baddy. The singular pursuit of your nemesis, the God King, in the first game was more feisty, if less ambitious.”

The only iOS-only reviewer in our little roundup, TouchArcade notes the increase in visual fidelity of Infinity Blade 2 over its predecessor. While the game will look great on older iDevices, owners of the iPad 2 or iPhone 4S will see the best performance due to their superior A5 dual-core chips.

“Infinity Blade 2 is a step a step or two beyond what was accomplished in the original, adding in layers and layers of next-level environmental and character texture detail on top of a ton of fantastic ambient touches — sharper shadows, stronger lighting, and a glut of atmospheric effects bolster what’s already a visual delight, especially on iPad 2 and iPhone 4S.”

There is one thing that all three can agree on, and that’s that, if you own an iDevice, you should probably pick Infinity Blade 2 up when it goes on sale in your country. It’s already shown up in Apple’s Asian store and other regions, like New Zealand, and it’s set to drop in the US tonight at 11:00 PM Eastern.

The game will set you back $6.99 and will be a universal app for the iPhone and iPad. When it does go live for you, you can find it at this App Store link.