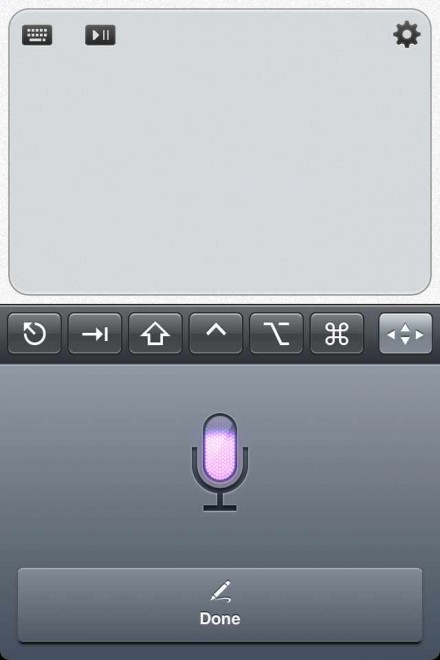 Edovia has announced the next major version of its popular remote iOS app, TouchPad. We’ve told you about TouchPad before, and this newest update brings many more features to what was already one of the best remote keyboard and trackpad apps in the App Store.

TouchPad lets you control your Mac from your iPhone and iPad. This 4.0 update brings with it the ability to use Siri on the iPhone 4S to interact with and send text to your Mac over a Wi-Fi network.

At last, TouchPad 4.0 is out with even more Lion Love! This version took more time than planned and most of the work was made deep down in the app, mostly in preparation of Screens 2.0, which uses the same VNC framework we’ve developed for the past years and had to be revamped. The result is a super solid app that won’t give up!

Some features, such as the dragging gesture, were changed so we recommend you take a look at the revamped help documentation, bundled in the app. However, there’s still many new features.

If you tap the Siri dictation key on the iOS 5 keyboard in TouchPad 4.0, you can now send text to your Mac with your voice.

The update also brings changes to the modifier toolbar on the iPad, support for the EyeTV media player, new OS X Lion shortcuts, and many other bugs fixes and stability improvements. Unlike many remote control apps, TouchPad only relies on OS X’s built-in Screen Sharing technology, meaning that you don’t need third-party server software running on your Mac.

We can’t recommend TouchPad highly enough. The app is available as a universal download in the App Store for $4.99.