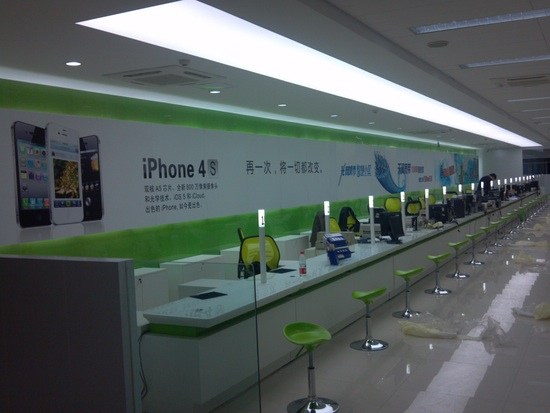 China’s Ministry of Industry and Information Technology recently gave the iPhone 4S the go-ahead for a launch in the largest nation on earth. The decision gave the green light to several major Chinese carriers to start offering the device, including China Telecom.

With over 120 million mobile subscribers, China Telecom is bigger than any single US carrier, and it’s never had the iPhone. So, you can see why anticipation is building for the operator to start carrying Apple’s latest, and most popular, handset…

The carrier itself seems pretty excited, as Penn-Olson is reporting that China Telecom has already started hanging large iPhone 4S promotional banners in its retail stores:

“Telecom sources told Sina Tech that the photos circulating online — like the one here — are indeed actual photos of local China Telecom offices, but that the posters were clearly designed just to “get attention” and don’t indicate Telecom was about to start selling the phone yet, though they will sell it eventually.”

With China Telecom on the brink of launching the iPhone 4S, and China Unicom and possibly China Mobile right behind it, Apple is about to have a major smartphone presence in the world’s most populated country.

If Apple is going to make a hard push in China, it needs to do so quickly, as it is currently striving for the best sales quarter in company history.