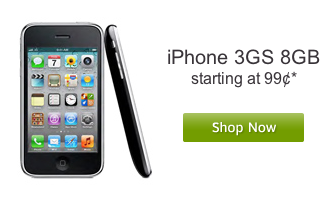 A lot of folks expected Apple to introduce an all-new handset this year. But instead of unveiling a completely new iPhone model, Apple announced that it was going to make its iPhone 3GS free with contract to appeal to the low-end smartphone market.

The $0 handset has reportedly been doing very well for AT&T. One can only imagine the marketing power of the phrase “get a free iPhone today.” But it doesn’t look like the carrier will be able to use such a tagline anymore, as it’s mysteriously raised the 3GS’ price tag to $0.99…

MacRumors points out the change, calling it a “curious move” on AT&T’s part. As aforementioned, the free iPhone was reportedly doing extremely well for the carrier. Here’s what AT&T’s CEO had to say about the promotion during the company’s recent earnings call:

“I also mentioned in my notes that we have another device that I think is going to dramatically change those people that are on smartphones and quick messaging devices, the 3GS, which is free with a 2-year contract. We’ve seen a tremendous, tremendous demand for that device even though it’s a generation old. And actually, we’re getting more new subscribers coming on the 3GS on the average than other devices.”

The $1 price increase shouldn’t hurt 3GS sales at all this holiday season, as it’s still the cheapest iPhone available (by far). And a recent study has shown that Apple’s smartphone is item number two on kids’ wish lists this year, right behind the iPad.