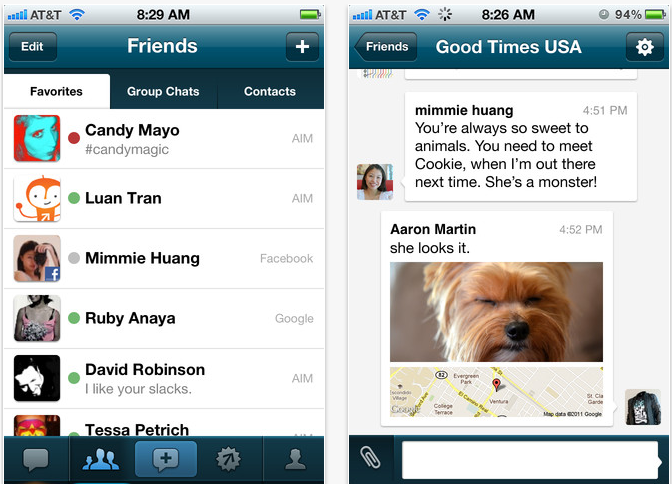 AOL’s AIM messaging system is one of the most popular out there, but it hasn’t really felt the AOL love of late. With clunky apps across all platforms and something of an identity crisis, AIM has become the established protocol that third-party apps have made a living out of supporting.

Now, AOL is seeking to give AIM some fresh paint, and has released details on its new apps, as well as making some of them available right now. One of those apps is now available for the iPhone via the App Store in both free, ad-supported and paid versions…

What you’ll get when you download either of the new AIM apps is a completely redesigned interface, with some interesting things added to the mix in order to drag you away from BeejiveIM, IMO.IM, or whatever third-party app you’ve been using.

One of the big additions is the way AIM will now store and sync your message history, meaning your messages will follow you around, and you’ll never miss incoming messages even when you haven’t been signed in. Those worried about privacy need not panic, as AIM also features an ‘off the record’ feature, allowing messages to be kept out of the history for both parties.

AIM also adds support for location services and photos, which will show right inside chat logs, leaving no need to exit the conversation to check out an image. Support for social networks, like Facebook and Twitter, has also been added.

Other new features include the ability to set quiet hours and set new incoming message tones, should you like.

You can download the free version of AIM for iPhone right here, or here if you prefer to pay upfront and avoid any ads.