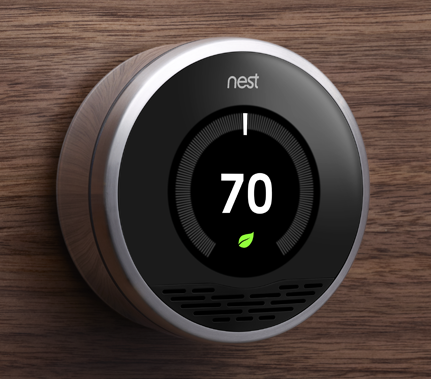 Tony Fadell is best known for his involvement in the creation of Apple’s hit music player. The DJ-turned-engineer oversaw 9 years of iPod productions and three years of iPhones. And after 18 months of silence, he’s finally unveiled his next big product.

It’s a thermostat. You know, the thing that controls the temperature in your house? Except this isn’t just an ordinary thermostat, this is an eco-friendly, Wi-Fi enabled, self-adjusting thermostat that you can control from anywhere in the world with your iPhone…

“Fadell’s new company, Nest Labs, is bringing Apple-level design and cool to those little boxes on the walls of a quarter of a billion US homes and offices that control the internal temperature. Why? Because all the ones on the market are ugly, they are too hard to use and they control a whopping 50% of the average American home’s energy budget. “

The Nest thermostat sports an old-fashioned rotary dial design, but don’t let that fool you — it’s very modern. Among its features is a set of sensors that can detect human movement. If it believes you’ve been gone for a while, it adjusts the temperature accordingly.

The Nest is also Wi-Fi capable and connects to your home network. This allows you to access the thermostat and its settings from a secure web portal, or better yet, your phone. It will have native apps for both iOS and Android platforms.

Fadell’s beautiful thermostat costs $249, and is now available for preorder from Best Buy.

Are you getting one?