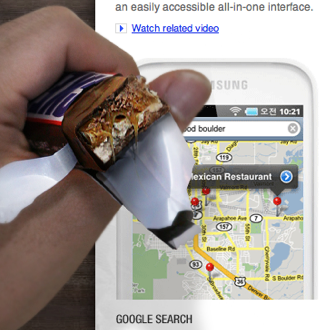 Oh Samsung! You’re making this easier and easier to call you out on your plagiarism of Apple products.

We’ve seen our fair share of images showing how Samsung goes out of its way to become an Apple copycat, but this one might be the most interesting. After adding Apple’s App Store app icons to its own company stores, Samsung is now using screenshots of the iOS Maps app into promotional documents…

As a matter of fact, John Gruber tracked down the exact screenshot Samsung used. This Maps screenshot was taken from a blog post by Laura Scott, back in 2008.

But don’t even try to look for this screenshot because Samsung already took it down.

If Samsung wants to prove in courts that Apple is the one copying its products, they’re going to have to try harder than that.