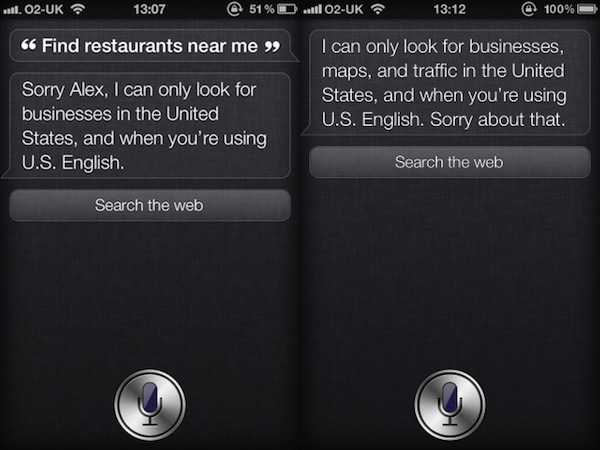 The stand-out iPhone 4S feature has to be Siri, Apple’s take on the virtual assistant. There’s something to be said for asking your iPhone questions or issuing commands, and having it go off and do the work.

Unfortunately, it appears that not everyone can experience the full magic of Siri, with some aspects of the digital AI not available for those of us outside the United States…

Numerous reports on Twitter and the interwebs have pointed to users in both the UK and Canada finding gaping holes in the functionality that Apple showed off at their iPhone event last week, as well as their numerous promotional videos.

New iPhone 4S owners in the UK and Canada have both reported that one of the party tricks of Siri, being able to find restaurants nearby, doesn’t work. When asking Siri to find eating establishments, or anything else location-based for that matter, our new digital friend politely refuses, informing disappointed users that he, or indeed she, can only look for businesses in the United States, and when you’re using US English. The same goes for maps and traffic.

Now before anyone gets the pitchforks out and heads to their nearest Apple Store, it’s worth remembering that even Apple calls Siri a ‘beta’ and they have said in the past, across their website no-less, that ‘features may vary by area.’

The good news? Apple has already indicated that they are working on bringing local search and maps available to additional countries in 2012.

Hopefully, and we’re all hoping furiously here, that Apple will see fit to extend their location-based Siri-goodness to those of us outside the States sooner rather than later, though who knows when that will actually happen?

Until then, we’ll just have to make do with talking to our iPhones for other things.