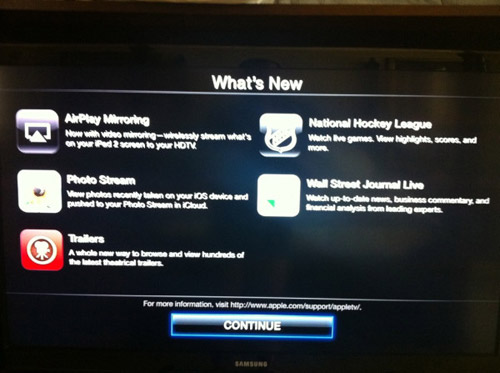 Today, Apple released iOS 4.4 for the Apple TV 2G. Apple did not release an official iOS 5 update for Apple TV users as expected.

As noted by the folks over at Electronista, Apple did however release iOS 4.4 for the Apple TV. This update adds iOS 5 features, but is still called iOS 4. This update adds AirPlay mirroring, Photo Stream, and Movie Trailers. Apple also added some third party apps, such as an NHL app and a WSJ app for video consumption.

As expected, Apple also added improved software speeds to the Apple TV. The Movie Trailers app also has better search functionality. You can also mirror your iPad 2 via AirPlay on the Apple TV. The iPhone 4S also supports this feature.

Let us know what you think of this new Apple TV update. You can download it directly from our downloads section.