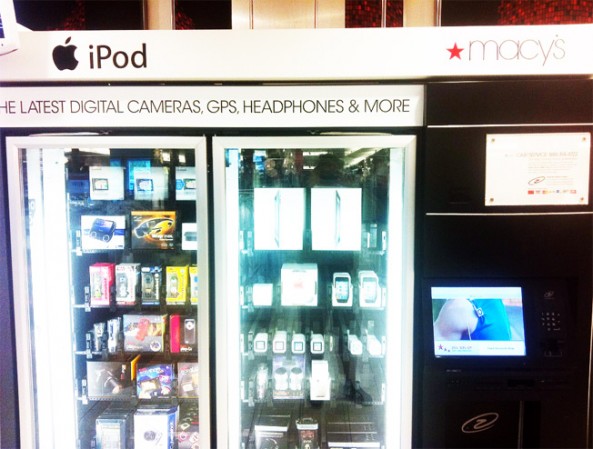 The first vending machine, according to Wikipedia, was invented by Hero of Alexandria. The Greek engineer’s machine would dispense holy water upon coin deposits. Obviously, it’s come a long way since then.

Nowadays vending machines carry everything from drinks to candy. And in some places, (mostly airports) you can even score a digital camera and other small electronics from these digital kiosks. So, where do these things go from here?

According to The Consumerist, their next step is to start offering $500 tablets in the men’s department of major retail stores. The popular consumer-awareness site spotted a vending machine inside of a Macy’s Store, serving up iPads.

“It was an unexpected sight. I guess impulse buys aren’t just for Skittles anymore. Yes, the iPad vending machine. Perfect for those times when you’re running late and need to pick up a 3-pack of Hanes and a $499 multitouch Wi-Fi-enabled tablet computer in the same trip.”

Actually, several stores like Walmart and Target already offer that one-stop-shop experience, but we get the point. It’s rather odd that a store, attached to a mall with an Apple Store, would have an iPad vending machine. Does it ever get any business?

Finding Apple products in these machines isn’t anything new. But the fact that they are now turning up in the men’s department, in a store like Macy’s, is quite peculiar. I just have one question. What’s the return policy on something like this?

Would you buy an iPad from a vending machine?