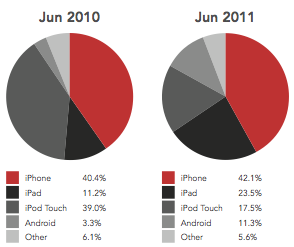 Well, the title of the post gave it all away. But yes, according to hotspot provider Boingo, iOS represents as much as 83% of mobile usage in some airports…

“iOS has a commanding market share of mobile devices actively using Wi-Fi in those same venues, representing more than 83% of mobile total. Android more than tripled its market share from 2010, but is still a distant fourth place to iPhone, iPad and iPod Touch devices.”