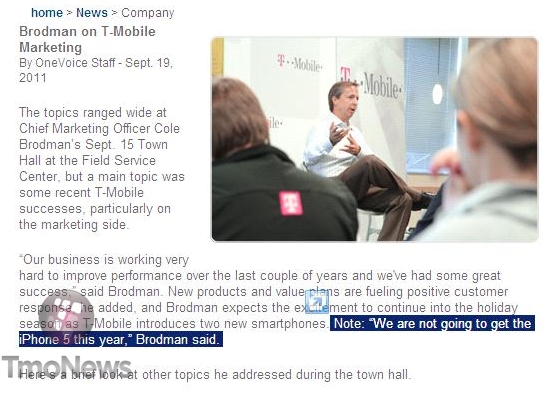 A leaked internal document from T-Mobile says that the carrier will not offer the iPhone 5 on its network this year. Previous rumors have suggested that Apple would open up iPhone availability on all US carriers with the iPhone 5 launch this Fall, but that doesn’t seem to be the case.

T-Mobile’s Chief Marketing Officer Cole Broadman has said that T-Mobile will not “get the iPhone 5 this year.” Should T-Mobile customers be concerned?

The leak document, obtained by Tmo News, details that T-Mobile will be introducing two other smartphones this Fall to stimulate customer interest. The authenticity of this alleged document cannot be verified, so we’re labeling this as “rumor” until more information is given. We’re still holding out hope for a T-Mobile iPhone.

If you remember, prototype iPhone units running on T-Mobile’s network were uncovered earlier this year.

T-Mobile’s CMO only mentioned the iPhone 5 specifically, so that doesn’t mean that the rumored iPhone ‘4S’ varient won’t be offered. Apple could have struck a deal with AT&T and Verizon for exclusive rights to the iPhone 5 initially, with Sprint and T-Mobile slated to get the flagship device sometime next year.

Sprint is still on track to offer the iPhone this Fall, but the exact details of that rumored Apple partnership remain unknown.

If T-Mobile didn’t offer the iPhone 5 at launch, would you not hesitate to buy the device on another carrier? Do you think the lack of iPhone availability on T-Mobile will continue to hurt the carrier moving forward? We’d love to hear your thoughts in the comments.