File syncing supremo Dropbox has given its mobile web app a lick of paint, thanks to a little help from one of the team’s interns. The new web interface has more than a little bit of iOS about it, and it obviously works fine with all mobile platforms, such as, Android and Windows Phone 7.

The first update to the web app in around three years has some new features added to the mix, bringing search functionality and sharing options that don’t currently exist in the App Store app… 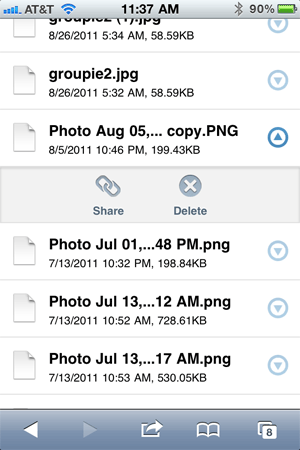 This isn’t the first time a Dropbox intern has been used for ‘real work’ at the company. Others have been responsible for a newly redesigned Android app, improved coding for the iOS app, and even a code obfuscator, aimed at keeping the Dropbox secrets out of the hands of the competition. Perhaps Apple’s iCloud team has been trying to sneak a peak?

As great as this web app is, we’re not so sure it’ll replace the already awesome, dedicated iOS app. But it’s a great backup should you need it. Just visit Dropbox.com in Mobile Safari.