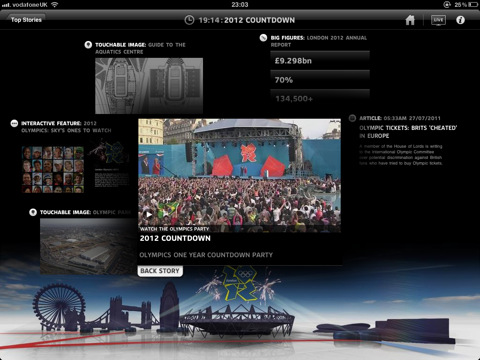 BSkyB’s Sky News iPad app has been so well received by both users and industry pundits alike that the company has now taken the decision to put the app’s content behind a paywall, removing the free content that has been available since the app’s release.

The move had been planned, according to Pocket-Lint, and now the app’s 500,000 users will have to pay £4.99 a month to continue using the app, unless they happen to be a Sky Television subscriber, in which case the app will continue to be free…

In a blog post yesterday, the head of digital media at Sky News, Andrew Hawken, justified the decision to put the iPad app behind a paywall, saying that his team has “created a truly premium product.”

“Our dedicated team of iPad journalists at Sky News are quite rightly proud of what they’ve achieved so far with the app. I believe we’ve created a truly premium product that consumers genuinely value, and this week we are making some changes to how users can access it. For the 10.2 million Sky TV subscribers, it will continue to be available free of charge driving even more value into a Sky subscription. All Sky subscribers need to do differently is enter their unique Sky ID the first time they visit the app.”

I wouldn’t really want to try and argue with that. Anyone who has used the app will have to admit that it has taken news to a whole new, interactive level. The team behind the app have somehow managed to take an often mundane subject and turn it into a beautiful, video-laden resource that is a pleasure to use.

If I weren’t a Sky TV subscriber that’s continuing to get the app for free, would I pay £4.99 for it if I had to? Probably, yes. Many may not like Sky News as a source of reporting, but it serves a purpose, and that app is just so well done, I’d pay to play with that regardless of the content!