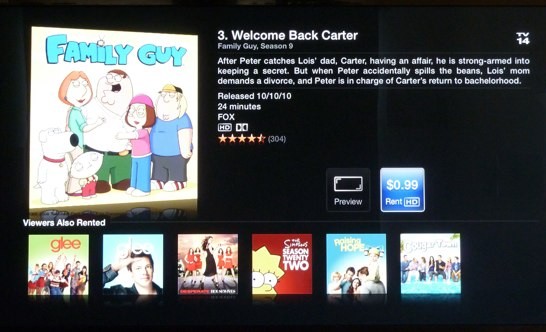 Several websites reported yesterday that Apple has discontinued its TV show rental program. The service launched last Fall and just never really garnered support from the major networks. They felt that the $0.99 price point was too low.

TV Show rentals were available through both the iTunes Store and Apple TV, but that is no longer the case. And Apple’s website has even been updated to remove mention of the rental option. So, what happened?

AllThingsD received a statement from an Apple Spokesperson on the matter:

“iTunes customers have shown they overwhelmingly prefer buying TV shows,” Apple spokesman Tom Neumayr said. “iTunes in the Cloud lets customers download and watch their past TV purchases from their iOS devices, Apple TV, Mac or PC allowing them to enjoy their programming whenever and however they choose.”

Right. Or, as MacRumors points out, maybe it was the fact that ABC and Fox were the only major networks on board. Warner Brothers, NBC, and Viacom all opted out of the program. With such little studio support, why wouldn’t Apple cancel it?

The move is definitely interesting, considering all of the recent rumors going around that the company is looking to start a TV subscription service. Maybe Apple doesn’t have as much pull in the industry as it (and everyone else) thought it did.

Will you  miss the ability to rent TV shows?