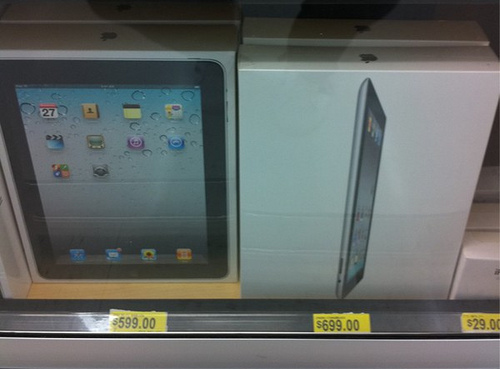 When you have a highly desirable product that’s worth hundreds of dollars, it’s an unfortunate inevitability that it will become the target for thieves. According to Crime Stoppers, this is just what’s happening to Apple’s iPad across the United States, with one Walmart store being the latest to feel the force of the unscrupulous public.

An article on DailyWorld tells of a theft at the Eunice Walmart, where two iPads were taken using the simplest of methods, and the Police are appealing for help in catching the perpetrators…

The con goes down like this: A male tells a clerk he wishes to buy two iPads, which are then removed from their locked enclosures. The man then asks if they can be saved while he goes to do the rest of his shopping, and the tablets are placed under the desk.

The seconds part of the ruse comes when a female takes the unfortunate iPads from their hiding place and later passes them off to a third member of the crew, another female.

It’s so simple it’s quite scary, and you do have to wonder why on Earth it’s even possible.

If you do happen to have any information on the bad guys, Crime Stoppers wants to know.

“If you have any information about this these crimes, please call Crime Stoppers at 948-8477,” said Darbonne, who added that all calls are kept confidential and the caller doesn’t even need to give their name.”