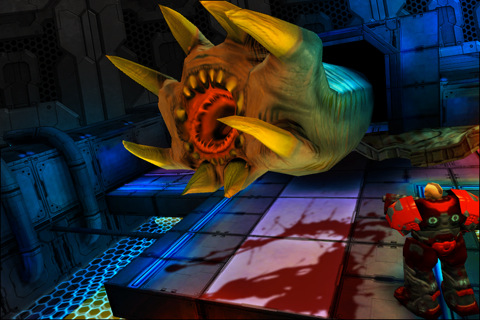 D.A.R.K. is the latest from Chillingo, and it is a dark outer space horror-themed dual stick shooter. It’s set up as a super-soldiers vs. aliens mystery thrill ride in 3D.

As a member of the D.A.R.K. Squadron, the player is on a mission to find out the events leading up to the current condition of the USS Stormbringer, an enormous military ship. The D.A.R.K. Squadron is a military unit – think outerspace version of the Marines, or maybe Special Forces. Serious tough guys suited up in serious armor and packing serious heat…

Which is a good thing, because the crew of the USS Stormbringer might be gone, but it’s definitely not empty.  The Stormbringer is full of zombies, monstrous alien life forms, and evil mechanical spider-like things. Getting out in one piece is as vital as getting the down low on what went down, and this game supplies plenty of action. 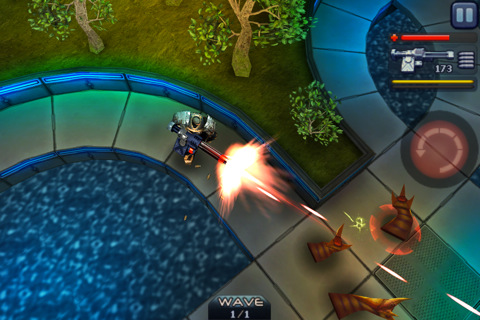 The controls are quite simple. Steering the character via touchscreen couldn’t really be any easier, with the top-down angle of the view and the narrow areas. Combat controls are also simplistic and intuitive. You’re basically just mowing down enemies; it’s experience and survival that boost the character during leveling.  Proficiency with individual weapons also levels up as you progress, packing a harder punch to your firepower.

The game’s not exactly a gamechanger – we’ve seen games of this type in the genre before. What it is, however, is a well-executed example of the type with graphics that pop and attitude to spare… And more action to come.

Because D.A.R.K. is only the beginning of this ride – episode two is supposedly on the way as a free update. It’s a visually attracting game, and if you like having a horror element thrown in with your shoot ‘em up space epics, D.A.R.K. is a great choice.

Visually, the game is impressive. The top down view is gorgeously executed and crisp. The close ups for cut scenes can be a little shaky, but that’s to be expected – it would be nice to see that cleaned up for the next episode though.

The game has a nice post-apocalyptic feel to it. The audio is fantastic, with separate themes for combat engagement and traveling which is a nice touch.

Overall, D.A.R.K. presents excellent material in a great way, which adds a lot to the game’s playability factor.

D.A.R.K. sells for $2.99 [iTunes Link] on iTunes, and if the future episode is as good as this one, that’s an incredible deal.