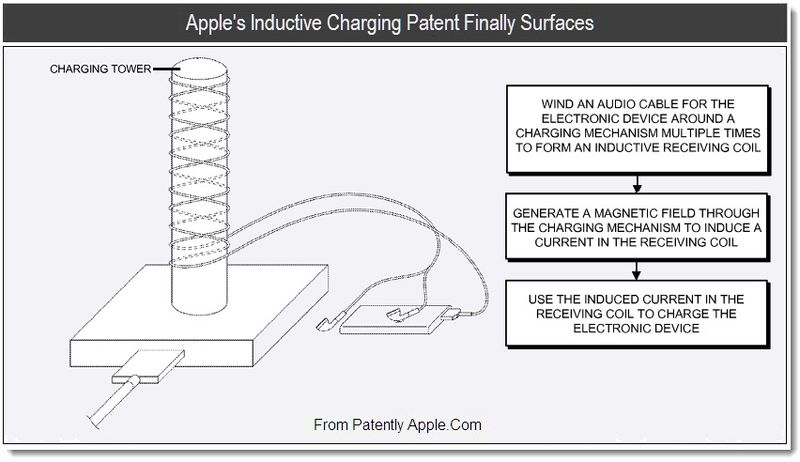 Inductive charging is all the rage these days. Palm was the first mobile manufacturer to bring ‘magic’ charging to the mainstream with its Palm Pre and Touchstone accessory.

Since then, iPhone case manufacturers have jumped to bring the same kind of functionality to Apple’s smartphone, allowing the handset to be charged by placing it on a mat of sorts. No plugs, no connectors. Magic.

According to a new Apple patent discovered by Patently Apple, the Cupertino outfit may be planning to bring inductive charging to the iPhone in a more practical way, while adding the typical Apple flair to proceedings…

The patent allows for a charging “tower” which will provide the power, but the way the energy gets from the tower to the iPhone is a interesting one.

According to Patently Apple, a user’s earphones will be wrapped around the tower, creating an inductive receiving coil. The earphones then obviously connect to the iPhone and, subsequently, power it.

It’s an interesting approach that Apple is exploring, and we never really thought they’d follow the same conventions as Palm.

As with most of the patents applied for by Apple, there’s no telling whether this will ever see the light of day in a sellable form, but the fact that the company is even looking into inductive charging and its benefits at least shows they recognize that it does indeed have its uses.

Having said that, it didn’t save Palm now, did it?