A recent Apple patent has been uncovered that outlines possible features in iOS that are made specifically for the aspiring journalist. If you’re at all familiar with CNN’s “iReport” idea for civilian journalism, then you’ll get the main gist of this patent.

What if the iPhone could automatically switch between the front and rear facing camera during an interview over FaceTime? “Report” and “Interview” are two proposed iOS features that detail this experience…

“According to a new patent application that was recently published, Apple has invented two potential iPhone features simply referred to as “report” and “interview” modes. The new features creatively utilize multiplex video streaming techniques whereby dual cameras on the iPhone could automatically switch back and forth between interviewer and interviewee seamlessly for a live report. While Apple may be working on future iPhone features catering to iReporters, I think that their initial features will definitely capture the imaginations of iReporters everywhere.”

CNN’s iReport citizen journalism initiative has over 750,000 users that submit tips, photos and video to various news publications. Civilian journalism is definitely a growing trend with social networks like Twitter. It’s becoming easier and easier for the average person to report on important events from a first hand basis. Apple apparently sees the importance in this trend, too.

The idea of a multiplexed video stream from the iPhone weaves the front and rear facing camera’s feeds together for a seamless interview or reporting experience. According to the patent in question, titled “Automatic Video Stream Selection,” Apple could add an extra physical button to the side of the iPhone next to the volume and mute switches.

Flipping such a button would initiate the iPhone’s video recording capabilities and use the device’s microphones to detect the direction of the sound. Based on where the sound was, the video feed would switch accordingly between both of the iPhone’s cameras.

Think about if you were interviewing someone with the iPhone: When you talked, the front facing camera would automatically activate based on your voice coming from behind the iPhone, while someone talking in front of you would trigger the rear facing camera. Pretty cool, huh? 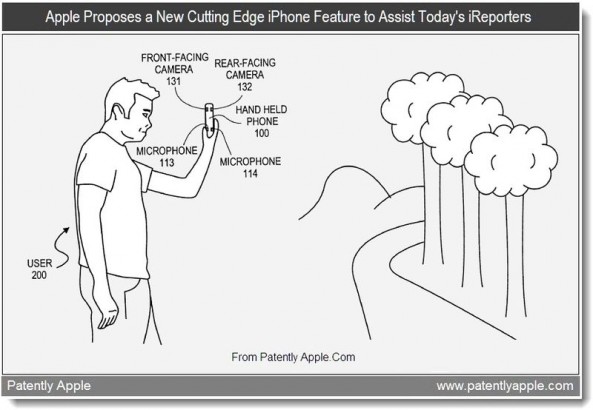 The patent also details a software button in iOS that would activate the same “Report” and “Interview” modes. We think that this makes more sense, because Apple would never add a physical button to their device for such a minor feature. Apple is all about hardware simplicity.

We’re curious to hear your thoughts on this idea. Would you use such a feature if it was available in your iPhone’s Camera app?