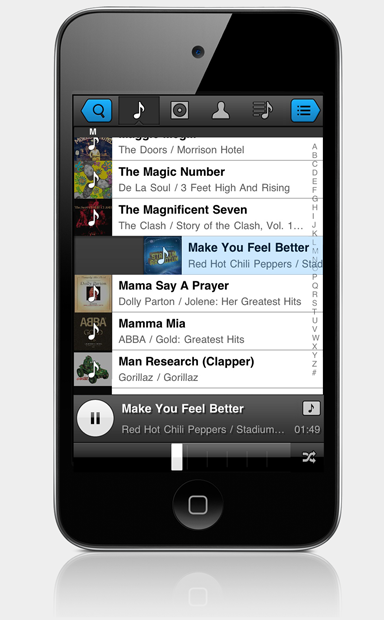 One of the slight blotches on the iOS report card is the platform’s less than inspiring iPod app. Yes it’s functional, and yes its user interface won’t make you want to poke your own eyes out with a cocktail stick, but it’s just not very exciting.

Past the app’s lack of excitement, it’s lacking such simple features. If only there was an app that we could use to replace the boring iPod app on our iPhones. Something a little more interesting. As of July 14th, there will be, with PanAmp due to be released into the vast ocean that is the App Store, and we think it’s going to be a bit of a hit…

While possibly not quite capturing the imagination as much as we’d hoped on the interface front, PanAmp’s claim to fame is undoubtedly its ability to create custom playlists right inside the app, as well as giving users the chance to queue up songs – perfect for parties and such. Funky stuff.

“Panamp is an evolution of the native iOS music playback application. It’s simple, yet powerful interface allows you to control, browse, list and listen to your music intuitively. Panamp’s operation has a natural and ergonomic feel, which will be picked up instinctively.”

Swiping left and right on a song brings up a variety of options for either adding to a playlist, or viewing more song information. It’s a nice way of handling menus, and makes a change to the tap and hold brigade.

We can’t help but wonder if PanAmp will actually see the light of day come the 14th though. Apple already has a history of killing apps it feels duplicate iOS functionality, and if there’s one thing PanAmp does, it’s duplicate the iPod app. It even uses your iTunes library, which while being a huge plus for users, might just irk Apple’s App Store peeps somewhat.

We hope PanAmp does hit the App Store tomorrow, we know we’ll be eager to download it just as much as the rest of you.

Until then, be sure to checkout the video for an insight into just what PanAmp will offer.

PanAmp will cost $2.99 tomorrow in the App Store.