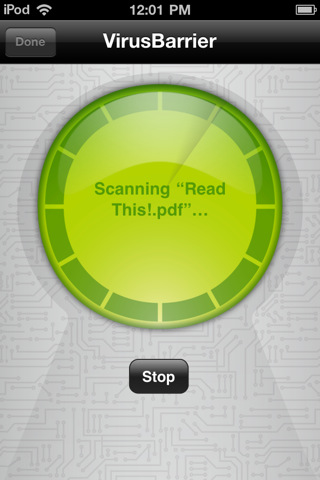 It had to happen sooner or later, and we now have our first iOS application designed for catching and eradicating malware.

While there are currently no known malware threats to iPhones, iPads or iPod touches, VirusBarrier is aimed at scanning the files we all find ourselves sharing around our local network…

The idea is simple: Our iOS devices are becoming a gateway for files to get onto our work and home computers, and VirusBarrier is designed to check those files before they can infect our machines.

“Your iPhone, iPad or iPod touch is a new vector for bringing files into your home or business network. While there is no known malware for iOS, files can flow through your device into your computers at home and at work, by e-mail, or via remote locations such as MobileMe or Dropbox. Mac and Windows viruses, malware and worms will take any path they can to get into your home and work computers, and can easily be passed on to friends and co-workers directly from your iOS device.”

VirusBarrier can currently scan all the usual documents we use our iPhones and iPads to interact with, and they don’t even have to be saved locally in order to be checked. Dropbox and MobileMe (and presumably, iCloud) checking is supported.

“VirusBarrier iOS lets you easily scan e-mail attachments, other files you have access to on your iOS device, or files on remote locations such as MobileMe and DropBox, web servers or WebDAV shares. VirusBarrier iOS uses Intego’s award-winning VirusBarrier X6 scanning technology to detect and eradicate all known malware affecting Windows or Macs: viruses, worms, Trojan horses, fake antiviruses, and other types of malware that might otherwise pass through undetected.”

If you’re a security conscious soul, then VirusBarrier may be just what you’ve been looking for. And in this world of malware and viruses around all corners, every little bit of protection helps!

VirusBarrier is available for $2.99 in the App Store. The fee also included 12 months of malware definition updates.

Is this necessary, in your opinion?