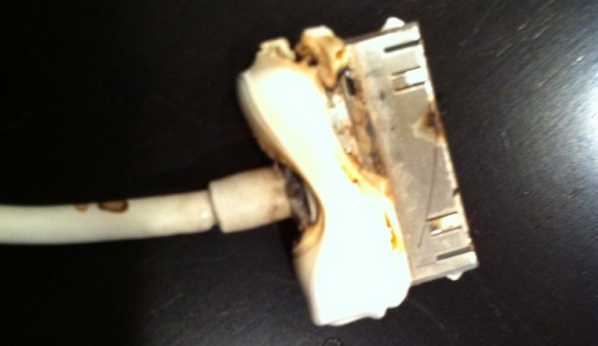 Running a beta release of iOS on an iPhone, iPad or iPod touch comes with a very specific set of possible problems, ranging from poor battery life, to potential software conflicts, to things just plain not working.

One possible issue that we’ve not really considered before is the chance of an iPhone actually settings itself on fire. And that’s apparently what’s happened to one iOS developer’s handset.

Or, his charging cord, at least….

iOS developer, Gus Pinto, tweeted out a rather jarring message yesterday, claiming that his iPhone’s charging cable had been ablaze while plugged into his iPhone 4 – an iPhone 4 running Apple’s iOS 5 beta. Thankfully, he managed to put it out before any serious damage was caused to his iPhone, or, you know, himself.

As if he already knew the skeptical world of Twitter might need a little proof, Gus tweeted the above photo to show off the scorched and charred remains of his brand new charging cable, the same one supplied with his iPhone 4. No cheap Chinese knock-off here.

While we’ve heard numerous reports of iPhones running a little hot while testing out a beta release of iOS (we’ve observed the same on our own hardware) this is, thankfully, the first time we’ve heard reports of anything getting warm enough to catch on fire.

Of course, there is no proof that the fire was indeed related to beta software. Perhaps the cord was already faulty? Perhaps Gus happens to live inside a furnace?

While we wouldn’t suggest sitting your iPhones in a bucket of ice when charging, it might be worth just keeping an eye on the charging process, at least until iOS 5 is finished by the boys in Cupertino.

Does your iDevice get a little toasty while using the iOS 5 beta?