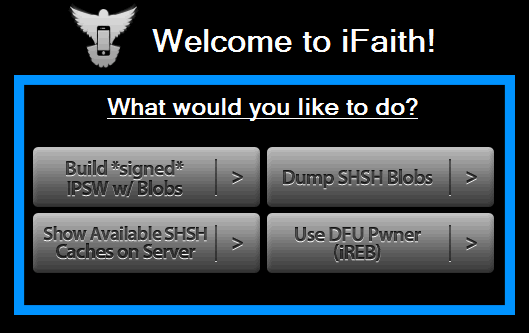 iFaith, the SHSH dumping tool, has received an update and is now available to the public for download.

Up until iFaith came out, if you wanted to restore your device to a previous iOS firmware, the only way to do it was to save the current firmware’s SHSH blob using tools such as @notcom‘s TinyUmbrella or Cydia’s ‘Make my life easier‘ function which automatically saved your SHSH blobs to Cydia’s server.

If you didn’t save the SHSH blob and Apple stopped signing for that iOS then you would not be able to downgrade, as iTunes would stop the process from being completed during the ‘Verifying firmware’ phase of the restore.

The unique thing with iFaith is that, regardless of what firmware your device is running, iFaith will extract the SHSH blob directly from the device. That way, you’ll to be able to restore back to that same firmware in the future, even if Apple is not signing that firmware…

So whats new in the latest update?

General code improvements and bug fixes in regards to device and iOS detection. An additional new feature added into version 1.1 is that iFaith now SHA1’s the SHSH blob. iFaith now alerts the user if it was unable to hook iTunes instead of crashing.

iH8sn0w, the creator of iFaith, has also confirmed in the changelog that Mac compatibility is proceeding into development shortly.

With the Blob monster set to change the way we restore post iOS 5, the importance of saving blobs may possibly become a thing of the past for those planning on upgrading past iOS 5. However it’s still great to see support for iFaith being updated and revised for those planning on staying with earlier firmware releases for their devices.

You can download the latest version of iFaith from our downloads section. As mentioned above, iFaith is only compatible with Windows.

What do you think of the latest version of iFaith? Have you found it useful since it was first introduced? What would you like to see in future releases? Let us know what you think.