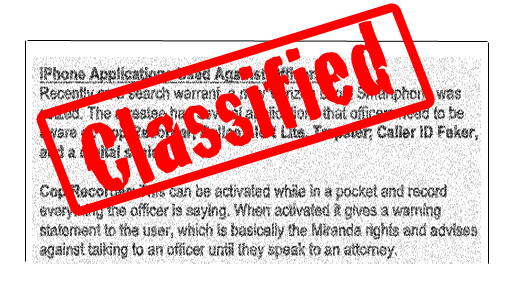 Lulz Security, commonly referred to as LulzSec, has been causing all sorts of chaos around the web for the past few months. The team of hackers is responsible for a number of recent attacks, including posting a fake news story on PBS.com and knocking the CIA’s website offline.

Though their recent attacks have been fairly harmless, their most recent break-in has made a lot of folks nervous. Last Thursday, LulzSec published more than 700 confidential documents stolen from the Arizona Department of Public Safety (DPS).

The 440MB of data included emails, handbooks, images and other sensitive files, some of which revealed the identities of Arizona Law Enforcement. In sifting through the data, Techland uncovered a form particularly interesting to iDB entitled “iPhone apps- used against officers.doc“

The document lists several smartphone applications that Arizona police officers should be aware of. Though many of you will have heard of most of if not all of the applications mentioned, we still thought it was interesting to see what apps the Arizona Law Enforcement deemed dangerous.

Cop Recorder: A voice recorder that can be activated while in a pocket to record conversations with arresting officers.

Trapster: An application that warns users of police radar locations and speed traps based on crowdsourced data.

Caller ID Faker: A jailbreak app for the iPhone that allows users to push a fake number to caller IDs when making outbound calls.

Digital Scale: turns an iPhone into a digital scale that weighs in grams and ounces.

According to the leaked data, officers are advised to check arrestee’s cell phones to see what kind of applications are installed. They are also cautioned to place iPhones in faraday bags or similar containers to shield them from services like Find My iPhone and Remote Wipe.

If you ask me, the list of apps is rather flimsy. What good would it do an arresting officer to find Trapster on a cell phone? Obviously Digital Scale and Caller ID Faker both make sense because they could possibly be used as evidence.

Thoughts? Do you use an app that you think is worthy of the list?