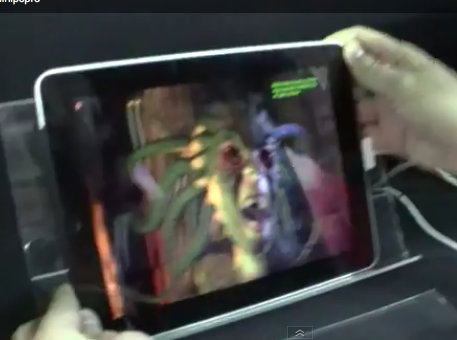 3D is one of those technologies that really seems to polarise people. Some people swear by the latest technology and point to the huge success seen at the box office with Avatar and say that it’s finally come of age. Others will say that 3D is just another gimmick thought up by hardware manufacturers to sell TVs now that everyone has bought a HD set.

3D is proving to be the big new thing in mobile devices whether we want it to or not, with various Android tablets and smartphone devices sporting 3D capability. Even Nintendo is in on the action with its 3DS handheld gaming device, but as yet Apple isn’t in the 3D market.

Of course, that hasn’t stopped anyone else from taking Apple’s hardware and shoehorning 3D technology into it…

At the Display Taiwan show, CPT has been showing off what appears to be a 1st generation iPad complete with a retro-fitted 3D screen. Utilizing polarising 3D glasses the bastardised iPad (though you wouldn’t know it – all identifying markings have been covered with tape) is seen displaying static 3D images in a video brought to us by 9to5Mac.

Whether 3D floats your particular boat or not, you do have to admit that this is an interesting piece of engineering by CPT – even if the cynics among us do think it’s a spot of equally cynical marketing.

The real question really has to be whether Apple will be tempted to bring 3D to its next iPad, or maybe even the iPhone 4s/5. More importantly, do we really care?