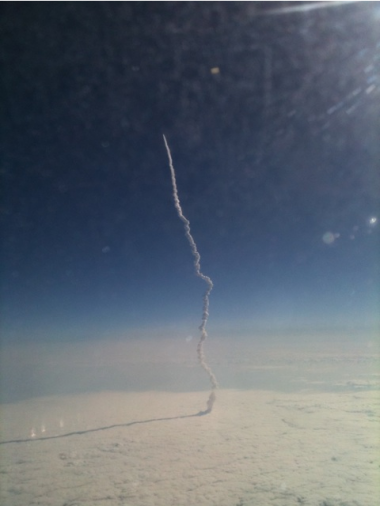 Stefanie Gordon had no clue that she would soon be internet famous when she boarded a flight from New York to visit her parents in Palm Beach. During descent, the pilot of the commercial airline informed the passengers that they could be witnesses to the space shuttle Endeavour’s last launch.

It turns out that the best camera is the one that’s always with you. And in this case, that camera was an iPhone. Who knew the iPhone could shoot a steady video at 15,000 feet from a passing airliner…

Stefanie played witness to a historic moment with a unique vantage point. She got to share that moment with the world, thanks to her trusty iPhone.

“As the plane descended toward Palm Beach and the Endeavour’s launch became visible, Gordon pulled out her iPhone and snapped a few photos and a short video. On the ground, she posted one of the photos to her then 1,800 Twitter followers.

In a few hours, she was fielding phone calls from ABC, the BBC and CNBC. She had accumulated about 1,000 new Twitter followers, and she had to turn the @mention push notifications off on her phone so they wouldn’t drain the battery.”

It’s awesome to see devices like the iPhone capture such monumental moments and help spread information around the world.

What do you think? Do you think that the iPhone is a more valuable camera because it’s always with you?