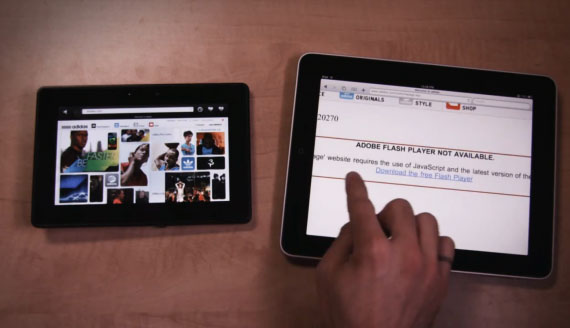 Although the tablet doesn’t offer any kind of threat to the iPad 2 in terms of market share at this point, I hope the folks over at Apple are taking notes. There are a few things that the juggernaut could learn from the rookie tablet.

You knew it was coming, so we’ll get it out of the way first. Flash. Although I’ve never seen Flash work properly on a mobile device, the BlackBerry PlayBook plays back Flash videos effortlessly. While I admit I probably don’t encounter many problems by not having Flash these days, it’d be nice to have access to Flash-based Videos.

Believe it or not, those folks over at Research In Motion, known for not being on the cutting edge of technology, produced a brighter and sharper screen than the iPad 2. I’d like to see Apple increase the next iPad’s screen resolution substantially. Retina anyone?

While a wealth of 3rd party apps make up for the features Safari lacks, they don’t have the ability to be the default browser. If you open a link from an email or application, you’re tossed right back into Safari. The PlayBook’s web browser, on the other hand, has tabbed windows and an easy way to manage them. The Safari multi-page browsing system works nice on the iPhone, but the iPad could use a different design.

So the iPad is touted as a great portable media device that allows you to play games and watch movies, but the mono speaker is so last year. The PlayBook comes with stereo speakers and sounds amazing. I’ve always felt Apple’s iDevice products could use better quality speakers, but I’m sure they just assume accessory makers fill that void.

With the PlayBook, you’re able to tether your BlackBerry smartphone and access all of your information in real time. I know it’s also flawed in this area by not providing native PlayBook Calendar and Contact apps, but it would be nice if the iPhone shared this feature. Imagine not having to use a 3rd party application to transfer pictures from your iPhone to your iPad.

So there you have it, a few things that the BlackBerry PlayBook did right. Obviously RIM’s tablet is in its early stages and the iPad 2 is clearly winning the tablet war.  Hopefully though, we’ll see some of the missing features listed above, in the next iteration of Apple’s tablet.