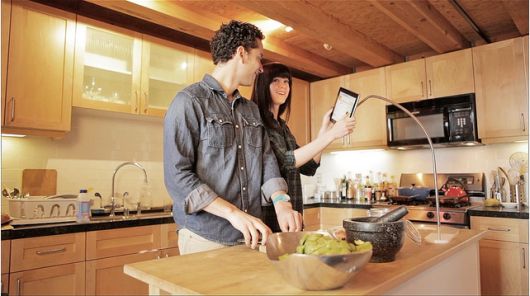 Have you ever tried looking at a recipe application on your iPad while trying to cook? Or tried to learn how to play the guitar via an iPad app? These things would be so much easier if you had someone or something to hold your tablet for you.

Enter the Kickstarter project by designer Seth Quest. It looks like him and his partner just recently raised enough money to fund production of their prototype, the Hanfree.

The iPad accessory is designed to hold your iPad for you, leaving your hands free to do other things. The Hanfree is essentially a case attached to a wide base, with a steel neck and a ball and socket joint.

This setup allows for 360 degree rotation of the iPad, so it can easily be switched from landscape to portrait mode. The see-through case securely grips your iPad as you’re using it, and the stainless steel neck pivots so you can swing the device out of the way when you’re not.

I think the design is fairly brilliant given the options of iPad stands currently available. Apparently others think so too. The Kickstarter project has exceeded its $15,000 goal and is set to be funded early next month.

Even though they’ve already collected enough to start production, they are still taking donations. If you pledge $50 or more, you get a Hanfree once they start shipping. Not a bad deal considering the product will retail for $79.99.