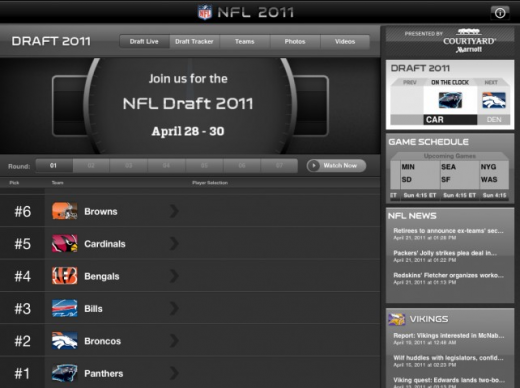 While an NFL season is questionable, the draft seems to be right on schedule. On April 28th, last year’s top college football players will participate in the NFL Draft where players are selected by professional teams.

The NFL iPad app will allow you to watch live video of the draft, along with several other great features. You can check which positions your favorite team needs help in and view a detailed breakdown of each player that gets drafted. You can even set the application to alert you when your favorite team is up for selection.

Outside of the exclusive draft coverage, the application is pretty bare. There is a section where you can read general news and view the entire NFL schedule, but that’s pretty much it.

If a 2011 season does go on as planned, the NFL has mentioned that there will be a lot more content pushed out to users via an update. You’ll most likely get the usual cocktail of features like in-game highlights and up to the minute league scoreboards.

I would be interested to see Fantasy Football get integrated into the application. Maybe even throw in some audio clips of popular players that are wearing microphones throughout the game.

Although it’s kind of on the light side right now, if you’re planning on watching the draft next week, this application would make a nice accessory. NFL 2011 for iPad is free to download from the App Store.