Great news coming out of the Twitter-sphere today, as Stefan Esser, better known by his Twitter handle, @i0n1c, has confirmed that Apple has left his untether vulnerability in iOS 4.3.2.

That means that as our report speculated yesterday, an untethered jailbreak for iOS 4.3.2 is possible, and will certainly be released sometime in the not-too-distant future.

According to Esser, his iPad 1 is already running iOS 4.3.2 with an untethered jailbreak.

The question is, when can the general public expect the next version of RedSn0w and PwnageTool?

The answer to that question, is anytime after Sunday, as Esser states that, “[He] won’t be able to create all the untether binaries before Sunday, because [he] will be on planes, …”

As much as we’d like to lock them in a cage to continuously work on jailbreak solutions, our favorite jailbreakers have to travel and have fun too. 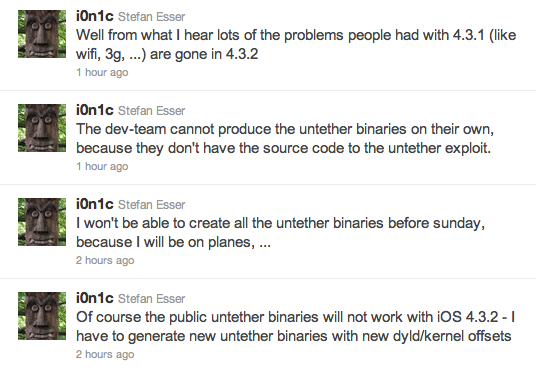 You might be wondering why the iPhone Dev Team doesn’t just get cracking on the latest versions of RedSn0w and PwnageTool, but it’s not that simple; the Dev Team doesn’t have the necessary source code for the untethered exploit.

Hence, all will have to wait until i0n1c and the Dev Team can get together and work out the latest untethered jailbreak solution.

The good news is that it appears that Apple has addressed some of the reported Wi-Fi and 3G connectivity issues in their latest 4.3.2 firmware.

Other than a few bug fixes, there’s nothing that compelling that should have you feeling antsy about this latest jailbreak. It’s not nearly as big of a leap as 4.2.1 was to 4.3.1, so be patient and wait on i0n1c and the Dev Team to do their thing.