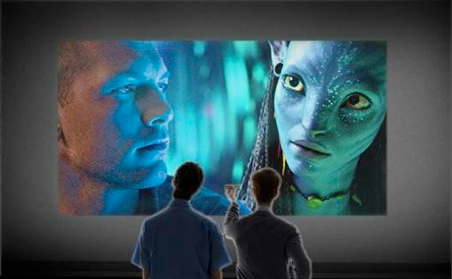 Although in many cases they don’t make it to consumer products, patents kind of give us an inside look at what a company is working on. Trust me, there’s no better company to peek in on than Apple.

Their latest patent filing to make its way around the web, describes hybrid laser projection technology. Before you start thinking Star Wars, let me explain.

Apple describes the hybrid laser projection technology as a system that can be used to display images using coherent laser light as opposed to incoherent incandescent light of normal projectors.

The benefits include lower production costs and higher quality images. It also notes that combining an incoherent light source with a coherent one would consume less power and could reduce the size and complexity of light projecting systems.

How could they use this technology in their products? 9to5Mac seems to think they might be integrating it in an Apple-branded TV set. That’s not a bad prediction considering all of the recent Apple TV rumors, but I’ve got another idea.

Remember the LG Expo? It was an LG smartphone with a built-in micro projector. You could project captured and downloaded content onto any flat service, with quite a sizable viewing area.

The phone was essentially a flop but the technology was still fascinating. Now there are dozens of pico projectors on the market, many of them even compatible with Apple products.

I could definitely see Apple doing something along similar lines. They have a history of bringing innovative technology to the average person by making it simple and sexy.

Imagine an Apple TV device, much like the ATV2, that has a built-in high definition laser projector. It has outstanding battery life and content can be projected clearly on almost any surface. Maybe it even supports iOS apps and obviously AirPlay.

My head spins with the possibilities, you could have TV anywhere. You could set up multiplayer games anywhere. This would be a revolution, especially if it were priced and marketed properly, which Apple also has a knack for.

While the idea is intriguing, known projected light-obstacles like daylight and lack of available projection surfaces certainly stand in the way of it making its way to shelves anytime soon. Maybe Apple is just going to project the laser images into thin air, Minority Report-style.