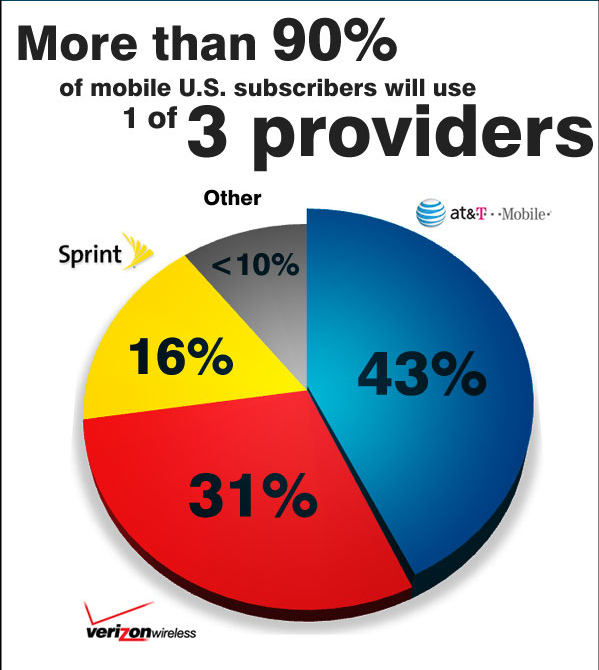 On March 20, 2011, a deal was reached between the 2nd largest wireless carrier in the U.S. and the 4th largest. This deal of epic proportions involves $39 billion dollars and the making of a wireless network that would top even Verizon’s giant reach of 100 million customers.

What does everyone else have to say about this? Well Sprint has been pretty public with how it feels about the T-Mobile takeover. BGR reported last week that Sprint CEO Dan Hesse made on the record comments about the merger and that it would “Stifle Innovation” in the wireless industry…

Not only would Sprint fall back drastically in the ‘amount of total customers’ race, they would be the only major wireless carrier in the U.S. without Apple’s iPhone. What does all this mean?

The folks over at AllAreaCodes have made a pretty nice infographic that shows what effects the AT&T and T-Mobile merger would have on the wireless industry. Check out pieces of it below.

Interestingly enough, even T-Mobile customers don’t want the merger to happen. They have turned out in large groups on Crackberry and T-Mobile user forums and have even started a Facebook page to publicly display their opposition to the merger.

This whole thing still has to get approved by the FCC. A lot of folks are confident it won’t, due to anti-trust laws. But all of this does make me look at this merger a bit differently. How will it all play out? Keep tuning into iDB and we’ll keep you updated.

What effects do you think this AT&T takeover of T-Mobile will have on the wireless industry? Sound off in the comments below!