The introduction of AirPlay in iOS 4.2 was the start of something big. Over the last 6 months developers and hardware designers have been integrating AirPlay into their apps and products in unique ways.

Of course we know AirPlay allows us to stream video and other content to your Apple TVs. We also know that AirPlayer will let us stream content to our Mac computers. But what if you wanted to share content from your iPhone or iPad with a friend directly on their iDevice?

AirFrame was released just a few days ago and aims to answer that very question. The app will advertise your iDevice as an AirPlay capable product (such as an Apple TV2). Then using the typical AirPlay function on another iOS device, connect to it. It should be just as easy as connecting to your Apple TV.

I like the possibilities here. Friends and family can share funny YouTube videos with each other. You can even share vacation photos with a friend just by using AirPlay to stream them to their iDevice. While I really love the concept, AirFrame still has some limitations. 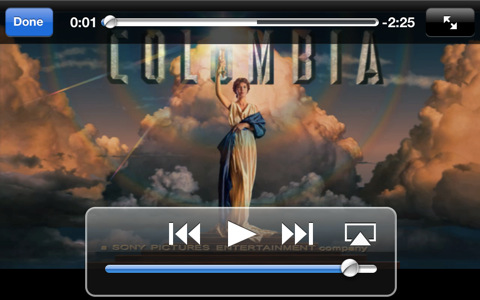 The biggest drawback is that the current version of AirFrame does not support audio, so you will be watching your videos in silence. Also as typical with AirPlay software, both iOS devices need to be on the same Wi-Fi network.

AirFrame is available now in the Apple App Store for $1.99. Honestly I need to see audio support before I’m a believer, but so far it has gotten good reviews in the App Store.

Have you tried this new app out? Do you do something similar with a different app? Tell us below!