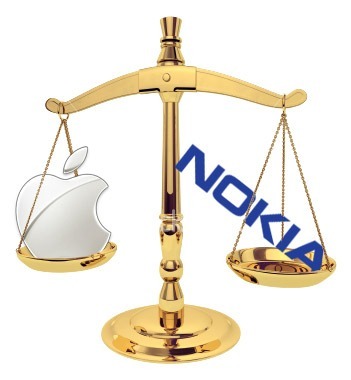 It seems like everyone is suing each other in the tech world these days, particularly those in the mobile phone business. In case you haven’t been keeping up with the latest in tech lawsuits, Apple and Nokia are suing each other over patent issues in the U.S. and Europe.

This specific court battle is being presided over by the ITC (International Trade Commission). Nokia has asked the ITC to bar the importation of Apple devices that infringe on Nokia Patents. While this move is just to block the shipping of Apple products that violate the patent laws, companion suits from Nokia are said to be under review by U.S. district courts seeking financial damages…

Although the suit applies to several Apple products, the specific devices that Nokia seems to have the issues with are the iPhone 3GS and the iPod Nano. The patents include wireless data, speech coding, security, and encryption. The Finnish company claims that Apple has been illegally using their ideas in their products since the original iPhone launched back in 2007.

Yahoo! Finance is reporting that an ITC  judge has made a decision today in regards to this Nokia vs. Apple patent suit. Judge James Gildea has made an initial ruling in favor of Apple. He finds that the Cupertino giant is not violating Nokia patents in any of their products. He sights lack of IP and other evidence such as invalid patent filings as major factors in his decision.

IP (Intelectual Property) has become a necessity to top mobile phone companies such as Apple and Nokia. It is really just the paper trail to ideas and inventions (mostly patent filings), which are especially useful for products that make it to the assembly line. Large manufacturers will even purchase smaller companies specifically to add their IP to their library.

Is the battle between Nokia and Apple over? No way. In fact, it’s just getting started. Apple and Android have taken a large chunk of the smartphone market, mostly at the expense of Nokia and their aging Symbian OS. The judge’s ruling is just the first round in what looks to be a grueling battle.

Now that Gildea has made his initial determination, the entire Commission must decide as a whole to either uphold or throw out the judge’s ruling. The expected date for that final ruling is August 1st of this year.

Does anyone think Nokia’s case holds water? Or are they just bitter about declining smart phone sales?