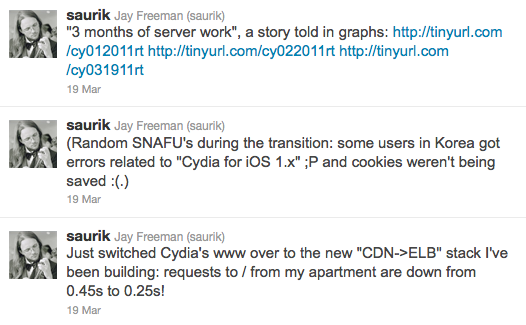 Jay Freeman (aka saurik), creator of Cydia and a key player in the jailbreak community, has been working hard the past 3 months trying to make Cydia an even better experience for all of us.

Cydia can be very slow at times (especially if you’ve got several repos added); taking several minutes to load up completely, sometimes to the point where it drives you nuts. Saurik has been hard at work and claims he has greatly improved Cydia response times, which should give a noticeable speed boost…

Saurik has moved Cydia’s server to the new CDN-ELB stack, which improves request times from 0.45s to 0.25s. Saurik also tweeted three graphs showing the impressive progress made with 3 months of server work.

Just switched Cydia’s www over to the new “CDN->ELB” stack I’ve been building: requests to / from my apartment are down from 0.45s to 0.25s!

(Random SNAFU’s during the transition: some users in Korea got errors related to “Cydia for iOS 1.x” ;P and cookies weren’t being saved :(.)

I applaud saurik and all of the jailbreak community for what they do. If it were not for them, I don’t think many of us would enjoy our iDevices as much as we do now.