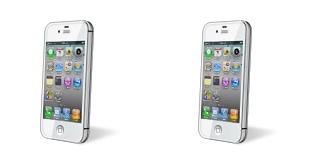 The white iPhone 4 is more fiction than fact these days. After it was shown off during the original iPhone 4 announcement, the white device has been yet to be seen again. It started off as a two-week delay. Then Apple realized how serious the problem was and the weeks turned into months.

After several months in hiding, the white iPhone 4 might be making a come back in the near future. Although there’s still no official release date, evidence is piling up that we may soon see this mythical gadget…

In February, we reported that Vodafone had a white iPhone 4 listed on their website as coming soon. Last week we mentioned a report that the white iPhone could ship as early as next month.

What’s the latest white iPhone 4 gossip? MacRumors is reporting today that one of their readers was poking around in the iTunes 10.2 resource files and discovered an icon for a white CDMA iPhone 4. It’s the icon that shows up in the ‘Summary’ window in iTunes when your iPhone is connected.

With so many rumors flying about this device, I try to take each one with a grain a salt. Not to mention with Apple’s iPhone 5 just a few months away, who really cares at this point if a white version launches?

Now that Verizon users can chime in, would you purchase a white iPhone if it launched in April? Tell us below!