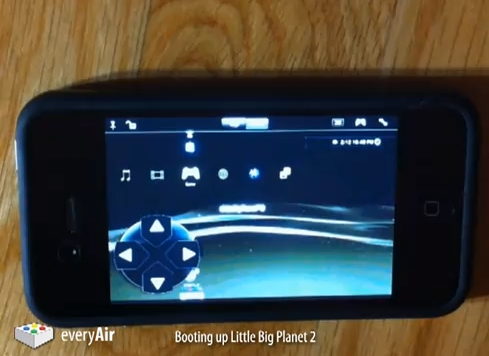 Ladies and gentlemen, I’ve got good news, and I’ve got bad news.

The good news is that playing PlayStation 3 games on your iPhone, iPod Touch, and iPad is a certain possibility. 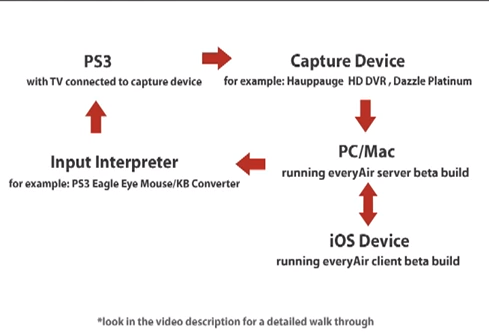 As noted, you can already download everyAir from the App Store today, as it is a remote desktop app that allows you to remote desktop into your PC. This allows ones to play games like World of Warcraft using only their iPhones.

Pretty soon, developers PandaElf, will be releasing an updated version of their software to enable “remote desktop” support for the PS3.

How were they able to pull this off considering the PS3 isn’t running a desktop OS, and doesn’t respond to clicks from a mouse like that of a PC? Check out the answers to some of their most frequently asked questions below:

Q: What were some of the hurdles?
A: There are two problems to solve: sending the video signal to the iOS device and sending back input from the iOS device. Sending the video signal is solved by using an off the shelf capture device, and then sending back the input is a combination of a custom build of everyAir with an off the shelf mouse/keyboard device that connects to the PS3.

Q: How do you send input to the PS3?
A: Using one of those USB Keyboard/Mouse devices. For example, Eagle Eye (search for it on Amazon).

Q: How do you send input to the PS3?
A: Using one of those USB Keyboard/Mouse devices. For example, Eagle Eye (search for it on Amazon).

Q: How do you get the video signal from the PS3 to the iOS device?
A: We do this by using an off the shelf capture device. The capture device connects to the PC, TV, and to the PS3. The result is that a livestream of the PS3’s video signal ends up on the PC.

So from the sound of it, this doesn’t seem to be any groundbreaking technology or anything, it’s just a group of developers that were smart enough to use the resources available to them to accomplish the task at hand.

Again, everyAir is available for purchase right now for $4.99, sans the PS3 support.

What do you think about this?