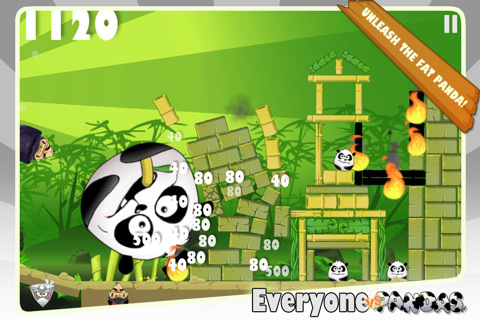 If you loved Angry Birds, you’ll definitely love Pirates vs Ninjas vs Zombies vs Pandas (PvNvZvP) (iTunes Link) by PAN Vision AB. This physics-puzzler is an “inspired” version of the popular Angry Birds Series. The mechanics and gameplay are essentially the same but PvNvZvP offers fans of the genre an interesting twist with loads of fun.

PvNvZvP will feature six exceptional campaigns packed with challenging levels. The campaign will pit Pirates, Ninjas, Zombies, or Pandas against each other in a delightful duel to the end. Similar to Angry Birds, you are armed with a cannon and must launch the poor little characters at rickety structures to eliminate all the enemies from the screen…

Upon finishing the stage you will be rewarded with up to three stars. This is a welcome feature because it adds a lot more gameplay value for fanatics and perfectionists alike. When you accumulate enough stars, the next campaign will unlock and you will finish the game in that fashion.

Each campaign will have units with special attacking abilities. For example, the fire pirate is the resident arsonist and will set inferno to anything flammable. Zombies will have a rotting zombie who will drop three bombs in midair causing thrice the damage and specially trained ninjas can powerfully dive into structures.

As you progress, the game will feature challenging obstacles that will add a welcome strategic element to the mix. The enemy will take your own kind captive and place them precariously close to them on the stage. Accidentally killing your friends will immediately require a restart so pull out your rulers, as accuracy is an important element of the game. Other things such as TNT Boxes and weighted objects will drastically alter your strategy and you may find yourself restarting a countless number of times, as some of the stages are really tricky to say the least.

The graphics in the game are enjoyable and the backgrounds are colorful and well designed. Each stage will have some kind of theme and the structures will be built around that. For example, the fossil dragon stage will be made of bones in the shape of a dragon! In addition, the characters and their blocky look were somewhat reminiscent of the cartoon “Samurai Jack” but they looked really cute and I couldn’t help feel sorry for those poor pandas.

Overall PvNvZvP offered a lot of fun ‘in the box’ yet the overall gameplay didn’t really feature anything that was ‘out of the box’ per se. However, mixing in friendly units with enemy units made the game surprisingly challenging and I honestly had a lot of fun playing the game.

You can try out the lite version (link) for free, or it’s only $.99 (link) for you impulse buyers!

Have you played this game yet? What do you think?