If you want fast food, you’re going to sacrifice on the quality of said meal; the same applies to music. Over the years the digital music revolution has indeed made digesting tons of good music easier, but it came at the expense of quality.

Apple is looking to rectify some of the quality issues by potentially allowing the use and download of 24-bit audio files; the current industry standard is 16-bit audio.

What does this mean for users like you and I? Does this mean we’ll end up paying more for our music? Check inside as we mull over the possibilities…

For starters, lets talk about 16-bit audio versus 24-bit audio. It’s likely that your average person who listens to their iPod via Apple’s stock ear buds isn’t going to notice much if any improvement.

For those of you who fall into the audiophile segment, you will no doubt appreciate the fuller, richer sound offered.

It’s almost like asking your grandma to tell the difference between a .wav file and a 320kbps .mp3 file. Chances are she’s not going to know the difference, although you probably will. 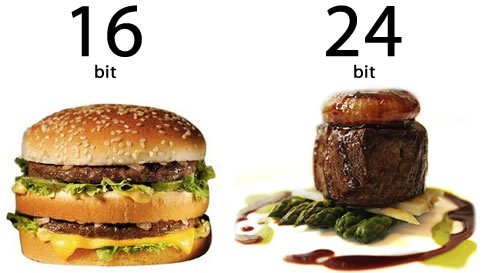 But the extra data comes at a cost, because it will come in at roughly 3+ times the size of your average 16-bit file. Hence, a 100mb album download all of the sudden turns into 300mb. See the issue here?

While storage has reached the point where a few hundred megabytes isn’t going to raise too many eyebrows, the bandwidth required for the extra data could present it as a legitimate concern.

And don’t think that Apple isn’t going to pass some of that cost over to you, the consumer. Likely they will have an option for a premium service of sorts where you can either pay extra per track, or front them a yearly fee similar to Amazon Prime.

The question is, will the increased audio quality really be worth the inevitable rise in cost? For me, that’s a no, because if I cared about a particular album that much, I’d just buy it on vinyl instead.