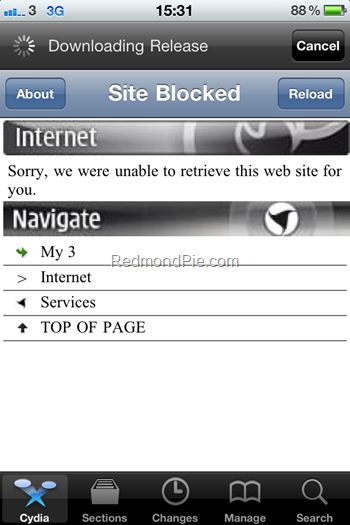 There has been reports coming from 3 different countries that Cydia was blocked by carriers, making it impossible to load Cydia over 3G. So far, only 3 countries and 2 carriers have been reported to be blocking access to Cydia: 3 Ireland, 3 UK, and China Unicom.

When trying to load Cydia over 3G, iPhone users in these countries get an error message saying the page cannot be loaded. Cydia does work fine on wifi though.

I’m not as surprised by the blocking of Cydia as I am by the timing. It seems that the blocking from the carriers started at the same time, which leads me to believe this is an operation that has been discussed and planned in advance…

Did Apple request the blocking of Cydia from certain carriers? Could be.

Update: According to TUAW, it seems this was a mistake from a third-party service that 3 uses to filter content. Apparently, Cydia was accidentally blocked and should be back up shortly in UK and Ireland. It still doesn’t explain why China Unicom is blocking Cydia as well.

Update 2: @Pablo_Diablo tells me on Twitter that he had the same problem on 3 UK. He simply called 3 and had them remove the restriction.

What do you think about that?