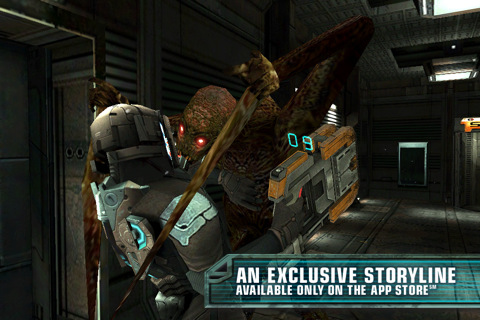 Dead Space is a new and terrifying sci-fi action game for the iPhone and iPod Touch. Love to scream during horror movies? Then start downloading, because you’re in for a treat.

Based on the console versions of the game, this small screen rendition manages to retain its dark and tense atmosphere, coupled with hardcore gameplay.

The suspense begins from the get-go, but the real terror begins when the lights are out. Grotesque aliens’ aka Necromorph’s will jump out and charge at you from every direction and it’s your job to blow them to kingdom come…

Controlling your character is very similar to any other third-person game. You can direct main protagonist Vandal’s movements by using the control pad on the left side of the screen. You look around and aim your weapons by touching the right side of the screen.

Tapping on the right will wield your weapon while tapping again will fire it. The controls are straightforward and those with experience playing third-person shooters should jump right in with no problems at all.

You begin with a lethal plasma saw to slice and dice to your pleasure, but there are upgradable weapons that are available.

In addition, you will have modules such as a Stasis that allow you to freeze your enemies, or kinesis that will grab and pull things from a distance, and allows you use it as a weapon as well. 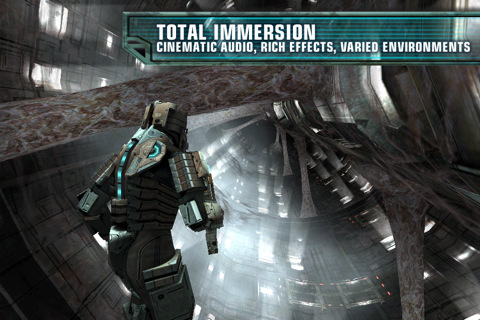 The graphics in this game are absolutely amazing and matches the dark mood of the game perfectly. Splattered blood on the walls along with fantastic sound design really adds to the tense atmosphere of this game. Every corridor and turn brings an ominous feeling and Dead Space does a great job of providing more than enough pulse-jumping suspense.

The developers said that there are 4-5 hours of play, but for more inexperienced or casual gamers you should expect more. In addition, there are 40 achievements available, and that should keep you busy for a while.

If you would like to increase its replay value, beat it on easy or normal and a hard difficulty is unlocked which really brings up the survival horror aspect of this game. You can buy Dead Space for $6.99 in the App Store. I look forward to hearing your thoughts!