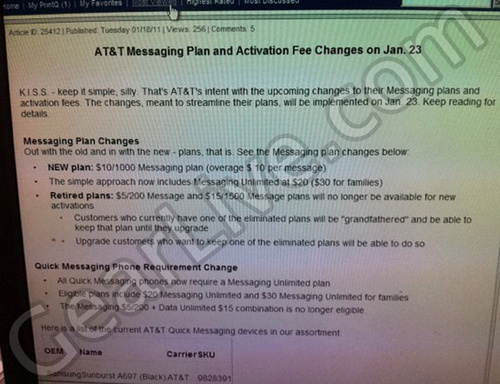 It looks like AT&T is planning a preemptive strike in the upcoming Verizon iPhone battle, with the first big change being new text messaging plans. AT&T says their intent is to simplify and streamline their messaging plans, with the changes due to go into effect on January 23, 2011.

Check inside for the details on the new plans, and what this means for AT&T customers…

The Messaging Unlimited and Unlimited for Families remain the same at $20 and $30 respectively. Below is a list of the current messaging plans:

The $15 for 1500 messages and $5 for 200 messages will no longer be available for new customers, but will be grandfathered in for existing customers.

So, what does this mean for AT&T customers? For those of you currently on unlimited plans, frankly, nothing. The good news is that for those of you who need more than 200 messages, but less than 1500 messages, it could save you $5 a month.

How does this compare to Verizon’s offering?

With these new changes, it’s easy to see that AT&T will have the better deal when it comes to texting plans. Only time will tell whether or not Verizon will be willing to adjust their prices to counter.

Full pricing details are still up in the air when it comes to the Verizon iPhone, but we’ll be sure to update you once more details surface.

What do you think about AT&T’s new plan? How do you feel about the prices of text messaging in general?