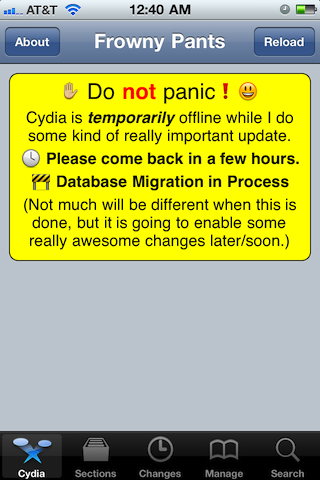 I fired up Cydia early this morning, and I was greeted with a bright yellow box that contained this message: “Cydia is temporarily offline while I do some kind of really important update.”

According to the message, the update will be completed in a few hours, bringing about some “really awesome changes later/soon.”

So, basically, we probably won’t be noticing any changes at this time, but these updates are laying the groundwork for what will be some significant changes in the near future…

Oddly enough, I was able to use Cydia as normal, and download a few new jailbreak tweaks for my iPhone with no problems. Whether or not the download service will be available throughout the entire update is still questionable at the moment.

Hopefully updated badge detection, a faster UI, and better backup options will be included with the new changes, but at this point it’s still anyone’s guess; no word from @Saurik’s Twitter account at the moment, either.

While we sit and speculate, why not tell us what you’d like to see from an updated Cydia?