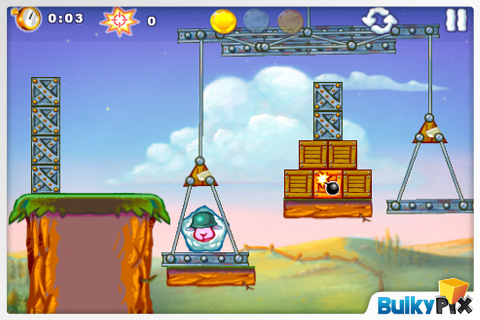 Saving Private Sheep [iTunes Link] was created by Bulky Pix and is a witty and fun physics puzzle game for the iPhone. Some of you may think of Saving Private Ryan (the movie), but that’s where all the similarities end.

The concept is simple yet deceivingly complex. You must save Private S. Ryan (a sheep), while he sits atop or dangles perilously from structures that only the Devil could have conceived. To save him, you will need to destroy boxes, blocks of ice, or exploding packages by simply pressing on each thing with your finger…

These will cause chain reactions with realistic movements, but must be executed effectively so that Private S. Ryan lands safely on a small strip of land, thus finishing the stage. However, there will be hungry wolves waiting on the edges of the land, so if he falls off or is blast off the screen then it’s back to square one.

Conversely, in some stages you will encounter wolves in sheepskin. You will need to do the opposite, destroy the structure so that the wolf is either blown off the screen or falls off into the ravine. This will become trickier in the later stages as both sheep and wolf are combined on the same level.

Each level will give you a ranking of gold, silver or bronze medals. Receiving these medals will be determined on the fewest moves possible to finish the level. Every time you destroy a box or make a move, it will count against you in your goal to get a gold medal. So strategy and careful planning is a must! This was a great feature as the result is not as important as the finesse, which may be hard for some of us guys.

That brings me to my next part, strategy. Some of the upper levels require a lot of strategy and perfectly timed explosions. You will find yourself restarting and replaying many times, or in my case, millions of times. Though it may not be possible to add hints, the in ability to skip forward a couple levels would have been appreciated as I’m currently stuck on level 75 and it’s really driving me crazy.

There are more than 80 levels in this game, and each was designed in a way to add to its addictive game play. Finishing difficult levels after multiple replays and receiving gold medals were especially satisfying. The graphics are really cartoony yet fun, and the background animations such as sheep’s parachuting in are really nice touches.

Saving Private Sheep is available from the App Store for $.99. I look forward to hearing your thoughts.