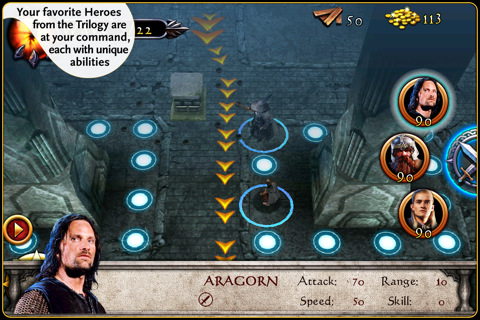 Lord of the Rings: Middle-Earth Defense [iTunes Link] was developed by Glu Mobile and was one of the apps that I picked up during the holiday Christmas sale. When I was young I read the book series maybe 3-4 times which made me an instant fan of the movie franchise, so this app was one of those must buys!

From this point I will save myself the trouble and refer it to as LOTR.

LOTR is a tower-defense game that brings the genre to a whole new level. Instead of setting towers along a set path, and watching your enemies run in your defenses, you will follow your heros on their quest to destroy the Ring.

During your quest you will come upon your favorite locations from the movie such as Helms Deep or the Mines of Moria. In addition, towers are replaced with your favorite heroes, which is really awesome for fanboys like me. Characters such as Legolas, Aragorn, Gimli and Gandalf are available as well as your small feeble Hobbits, and other minor characters. And how could I forget those adorable Orcs, Goblins, Nazgul and other huggable creatures…

In LOTR you will be able to upgrade your hero’s attack, defense, speed and range as well as special abilities that are specific to each character. For example, Legolas will have fire arrows that will do extra damage and Gandalf can cast a Meteor Storm, raining down death and destruction to those nasty Orcs and Goblins. You will be rewarded with gold for every enemy that you kill, which can be saved to buy these upgrades.

In addition, your hero’s style of fighting will be divided into either melee or ranged attack. Melee fighters such as Gimli, Aragorn, Boromir and other soldiers will go head on with the enemy if they are within range, whereas ranged attack characters will stay in one place while spraying arrows or hurling spears.

Another interesting feature of LOTR was the ability to manipulate the path of the enemies. There will be multiple entrances and exits for the monsters, and you can use barricades to change the direction or block the exits completely. In addition, you will be able to set down other things such as spikes and some kind of rotating bulb that will slow down the enemies when in range.

Other features in this game include, a challenge mode where you can go back to your favorite locations and face unlimited wave of enemies. Achievements, 3 difficulty levels and Game Center support.

This game is an absolutely must if:

This game is actually still on sale for $.99 (I don’t know how long though) but I would easily pay a lot more money for this game. I highly recommend it!