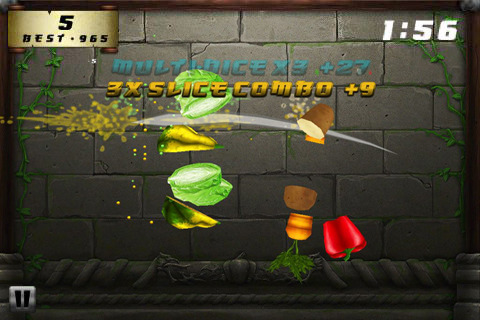 Veggie Samurai created by QuantumSquid Interactive, is a slice and dice upgrade from the popular Fruit Ninja game. While the name is almost a blatant rip off (e.g. does iPed ring any bells?), that’s as far as it goes because it brings a lot of fun and uniqueness to the table.

The first game mode has 3 similar styles. Samurai mode will throw vegetables and poison vials in the air. You will have three uncut vegetable drops, 3 broken poison vials or a mixture of the two before it’s game over. Chaos mode is similar to Samurai except that the speed is twice or three times as fast. And Hardcore mode will give you no second chances before the game is over…

Harmony mode will give you two minutes to slice as many vegetables as possible. Next, Match mode is where you have rows of vegetables scrolling down the screen and you have to cut 3 of the same vegetables.

I saved the last for the best. My favorite, Sort mode will have a cart which vegetables are thrown into. Let the allotted vegetables pass, while cutting all the other vegetables. My Best score is 526, and I have played this mode a lot! I have mastered it like a Ninja would master the Shuriken, so good luck beating that! (by the way,  when I posted the Ninjump review, some readers said that they beat my score, well I don’t believe you without screenshots!)

Similar to Fruit Ninja, you will be swiping, scraping, and wearing your fingers out. A very cool feature is the ability to get combos and cut vegetables into smaller pieces. This is really nice and it will allow you to rack up more points. I think the max is up to 4 slices for each vegetable, but after playing this game for a while I wish it was doubled to something like 8! In other words, it’s really that fun just swiping and going crazy on the screen.

The graphics are spot on with nice imitation of vegetable blood splattered on the screen and the little pieces flying everywhere. The music is very Asian-esque and matches the game really well and the slicing sounds are realistic.

Overall I think this game is really nice and great for casual gamers. During short breaks, I found myself playing the Sort mode all the time! This game makes Fruit Ninja look freshman, seriously! Anyways it’s great for short bursts of play and I highly recommend it to anybody who liked Fruit Ninja.

I thought it was a really fun game and it’s only $.99 and worth every penny. I look forward to SEEING your scores!