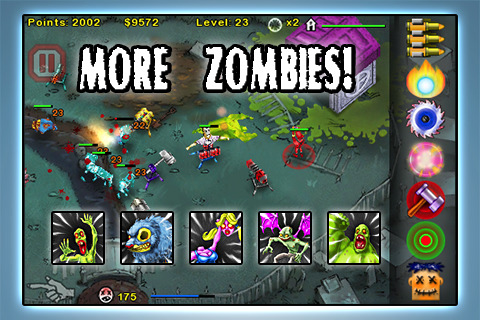 Their quality and know-how for games is not too shabby, so I expected the same from Zombie Attack! Bridge Defense XL. To save myself from agony of such a long name, I will now refer to it as simply, ZA.

ZA is a free roaming Tower Defense game in which you must defend against hordes of Zombies. If anybody has ever played the Xbox360 game called Left 4 Dead (which I loved!), you could consider it as the Tower Defense iPhone Version of that game, and I say that loosely…

The game provides 2 different modes, Survival and Challenge. Survival is where you try to stay alive the longest whereas Challenge mode presents you with some kind of handicap or achievement-type goals to acquire.

Survival mode gives you wave after wave of slightly strong Zombies. However, the Challenge mode will introduce you to various cute and strange looking zombies which are harder to kill… one of them reminded me of the Zombie version of Jabba the Hut! Oh I had so much fun killing him.

The concept of ZA is simple. You control a character and must kill Zombies via hand-to-hand combat or build turrets to stop the zombies from destroying your home. When you begin, you start with a measly knife, but as you kill more and more Zombies your weapon will automatically upgrade to more lethal weapons (no pun intended!) like a sword and shotgun. However, I strongly advise against going toe-to-toe with the Zombies because they will kick your ass every single time! So it’s best to wait until the Zombie’s health is 2/3 or 1/4 gone then go in for the kill! Unfortunately there will be times when you die at the hands of these bastards but don’t worry, you will be reborn in 10 seconds! Hallelujah!

You have a choice between 3 upgradable turrets, a flamethrower, machine gun and cannon. The flamethrower is self explanatory, but the machine gun is interesting because 10% of the time it will shoot off a Zombie’s head making it roam around aimlessly. Also standing in the proximity of these turrets will give it an extra 25% damage boost, but in the later levels, you really don’t want to be standing around them because there will be so many Zombies. And as I previously mentioned, they will kick your ass! (Even when you are wielding a shotgun with the Zombie’s head blown off!)

There are 4 different maps here, each offering different terrain. There will be parts of the map where for example, the ground is destroyed so Zombies, including you, will walk over it more slowly. So place your turrets around these areas to give yourself a little advantage. This feature was interesting as it added a sense of strategy to the game.

The Graphics in this game are questionable. As I mentioned earlier, some of the Zombies are cute. For example, the Zombie Cheerleader carrying around her head. I don’t understand, really, what were they going for here? The background was so-so, nothing special but nothing bad as well. The sound is what killed me though. The machine gun is very annoying. Once you have about 5-10 different machine gun turrets going at the same time, it sounded like percussion practice in ELEMENTARY SCHOOL. Yes, Elementary School, no rhythms, no beats, just noise.

As for the game play itself, well things get sorely repetitive and it’s slow. Once you set a high score you better prepare yourself for a 30-minute game to beat that high score. And after a few 30-minute sessions, well it gets boring… quickly. Anyways for Tower Defense fans that love to kill Zombies you can buy this game for $3.99 in the App Store.