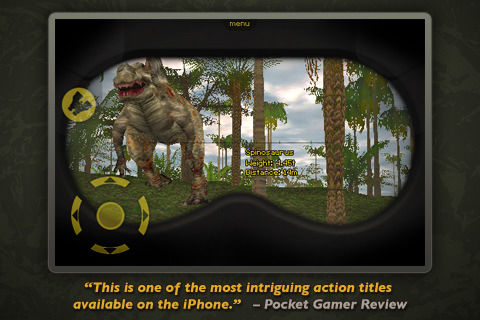 Carnivores: Dinosaur Hunter developed by Tatem Games is a first person hunting simulation game that puts you in the shoes of a dinosaur hunter. The game throws you into 5 different locations and made me feel like the Australian hunter that thought he was the king but eventually got viciously eaten from either Jurassic Park 2 or 3 (does anybody remember?).

Your goal is to hunt down dinosaurs with a choice of 6 different weapons that most hunters’ use like the rifle, bow & arrow and shotgun. With these weapons at your disposal, you will be hunting all types of familiar dinosaurs such as the Stegosaurus, Velociraptor and of course, the big mama of them all, the T-Rex…

The game presents two modes of game play, Survival and Hunting Mode. Survival mode gives you unlimited ammo and throws wave after wave of dinosaurs after you. This will test your stay calm under pressure and it might take a little work but your only goal is to kill them and not die.

In hunting mode, you are given just a pistol and set out to hunt only harmless herbivores. As you make successful kills you are given points, that accumulated can be used to unlock other dinosaurs, areas and weapons. If for some reason you are a member of PETA and are playing this game then you can choose to use a tranquilizer that will give you a 25% increase in points.

That brings me to my other point; hunting mode gives you other types of aids to help you in your quest to kill dinosaurs. Disguised Scent, Camouflage and Radar Tracking will all help you track down and successfully kill dinosaurs. However, using them will only reduce your total points per dinosaur killed. One cool feature is that if you wounded a dinosaur you could follow the blood trail that will lead you right back to your prize.

As this is a hunting simulation game, you cannot approach dinosaurs as if you were playing any other FPS game. You must take into account wind direction, line of sight and your surroundings if you want to successfully kill a dinosaur. These dinosaurs are smart (AI) and will either run away, gang up or barge toward you so be like a Ninja, quite and deadly.

Controls are simple but this game does have a high learning curve because of the factors just mentioned. You can play either as a lefty or righty, and can choose between a fire button or just tapping quickly on the screen to shoot your gun (iPad Version). I wish I could adjust my speed so I could kill dinosaurs that zigzagged towards me like the Velociraptor. Those things are hard to kill!

The graphics are nice and lush and the surroundings are realistic. However, I wasn’t entirely impressed by some of the big blocky graphics and the fuzzy trees.

The AI and Hunting factors make this game realistic but here are some factors that annoyed me. First, when choosing a dinosaur to hunt, the map only gives you that dinosaur and the same 2 herbivores every time. I mean, shouldn’t you accidently run into other dinosaurs on your journey to make your trophy kill. So with the radar turned on, I just followed it to my dinosaurs’ location without having to worry about running into other dinosaurs.

Second, killing dinosaurs. Don’t get me wrong, I had fun killing dinosaurs but no matter if I shot them in the foot or head it was always the same. There were times where I was 110% sure I had a head shot only for them to run away. For all the effort they put into realism shouldn’t you either #1 be able to make head shots, #2 shoot the dinosaurs in the leg to wound them so they would run more slowly or not be able to run at all?

Fourth – the rifle. Maybe I’ve been spoiled by CoD: Modern Warfare, but in those games you can hold you breath so your sniper rifle doesn’t move at all. This game doesn’t have this feature so your rifle is always zigging back and forth which annoyed me a lot and made killing at a distance very difficult.

Those small complaints aside, I really did have fun playing this game. I got eaten many times before I figured out how to kill the carnivores.

For those wanting a fun hunting simulation game that throws you into Jurassic-era than I highly recommend this game. Carnivores: Dinosaur Hunter is for $2.99 in the App Store and I look forward to hearing your thoughts.